Look at this beautiful rhino inflatable replica. Would you know this was an inflatable? Sadly, male Northern White Rhinos no longer exist on our planet due to poaching. The last male died in 2018, while 2 females remain. This rhinoceros replica began as a collaboration with artist Victoria Fuller, in which she depicted the animal living and dying as it inflated and deflated on a set timer loop, symbolizing life and death. This magnificent creature is on the brink of total extinction unless the Ol Pejeta Conservancy in Kenya is able to save the species using modern scientific techniques. Scientists are attempting to save the species using frozen sperm that was acquired from the males while they were still alive, and eggs that were recently harvested from the two remaining females. For unknown reasons, the two females cannot carry a pregnancy, which only raises the stakes. Fortunately, three viable embryos have been created and are now being stored in liquid nitrogen with hopes that they will be able to be transferred to another closely related species of rhinoceros as surrogate mothers in the near future. Let's hope for the best.

Realistic inflatable replicas pique many people’s interests. Our realistic line of inflatable animals, like this rhino, look very close to the real thing and people love it, especially children. Our designers are able to place highly detailed artwork onto three-dimensional shapes, in which realistic textures are used, including shadowing details. These small, yet important details make the overall appearance of the inflatable look more real. People can appreciate realism, especially since no animals are harmed or exploited in the exhibition of this inflatable prop. During a time of awakening, it’s important to try to make a positive difference in the world, and our inflatable animals can help keep real animals from being exploited and abused. These realistic rhinoceros props can be used to educate people on why they are at the point of extinction. Many of these beloved rhino species are endangered, and we think that’s very sad. These animals deserve to thrive, just as the rest of the animals on this planet. Our inflatable props have much to offer, especially at museums or other educational expos.

Rhinos are well known for their huge horns, thick grey skin, and muscular physique. With our inflatable rhino prop, we wanted to make sure to include these main attributes, and we think it came out pretty great. These “digitally sculpted” figures, when printed with high quality artwork, can create visually compelling illusions of some of our favorite animals, like this rhinoceros replica. Rhinos are known for their large horns. Our designers were able to successfully recreate the horns in fully inflatable form, without the need for foam or PVC. Thanks to the advanced patterning system, we’re able to create some really complex inflatable structures. Soon we’ll even have animatronic appendages to make these animals look even more real. 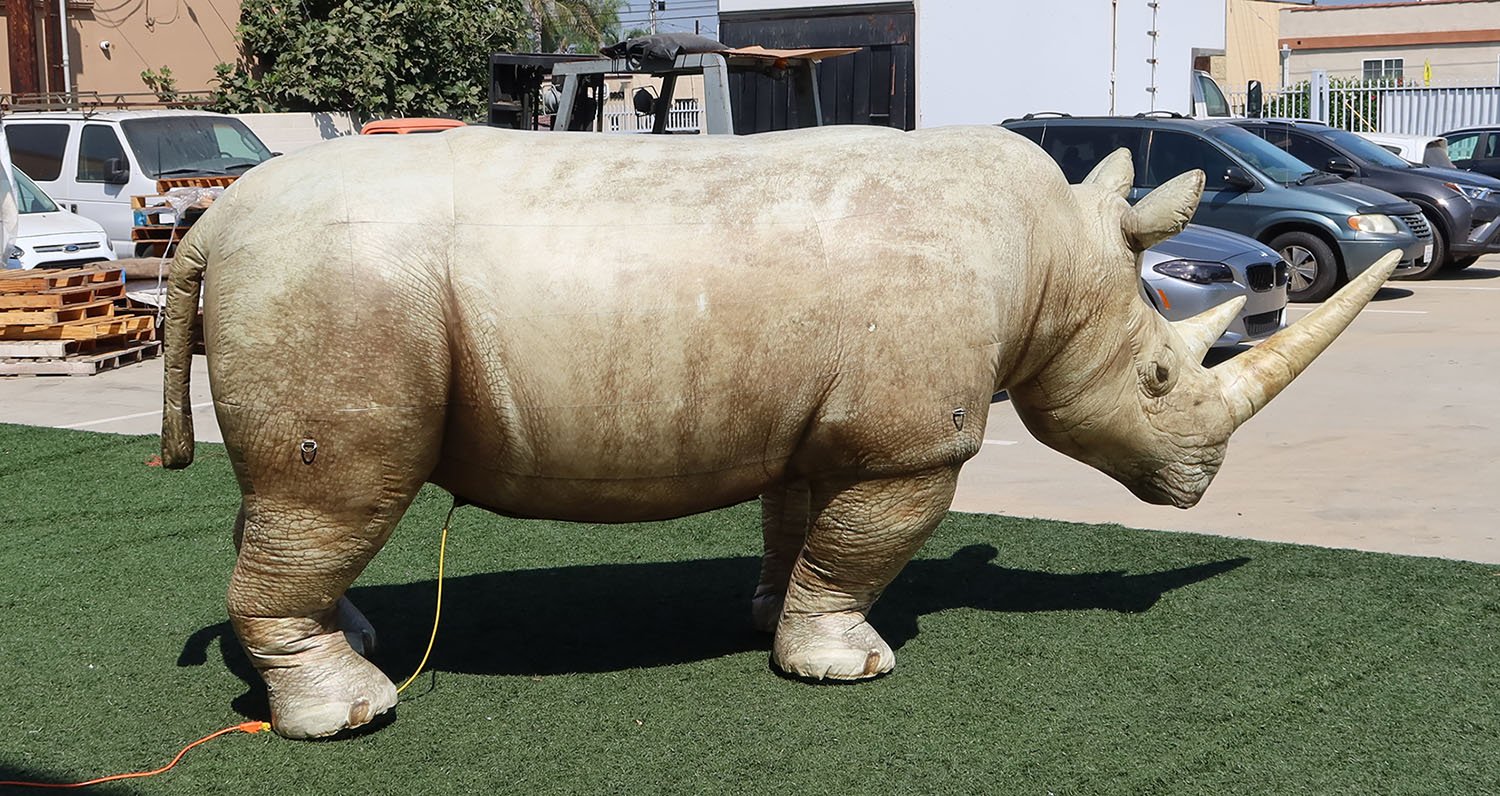 Our realistic rhinoceros can also be rented out and used for drive-thru experiences as they've been used in recent weeks. People love rhinos, so it's a safe bet that people will want to take photos with it at your event. Rhinos are cool because they have some neat adaptations. These large animals pack a lot of herbivorous muscle and their skin, although not quite like armor, can get up to an inch and a half in thickness! Their thick skin helps them stay cool during really hot days. Our inflatable rhinos are designed to look like real rhinos, but they only weigh a tiny fraction of the weight of a real rhino. Did you know that some rhinos weigh up to 8 tons! That’s the equivalent of 4 compact cars! These animals don’t really have predators, besides those pesky humans that is. Sadly, humans are the reason these animals are going extinct. Ladies and gentlemen, these animals will never come back, and it’s because of human activity. If we want future generations to have a healthy, diverse planet to live on, then people need to change their destructive ways and find a way to live on this planet in peace.

Rhinos are great mascots, so if you’re interested in getting one that is custom or has logos on it, we can make that happen. Our design team has the ability to change or modify any product we carry. In some instances, we can create artwork that looks just as stunning as real fur or scales, giving these inflatable props a distinctive look. So if you’re looking to increase exposure for your brand, a realistic animal prop can help you do that.

Our rhino next to one of our designers.